The film of For the Fallen, the development of the banners, the dancing and the finale…

Here is an opportunity to see For the Fallen again: 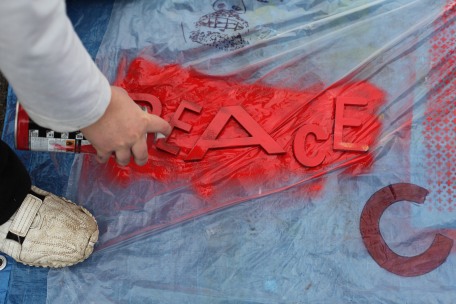 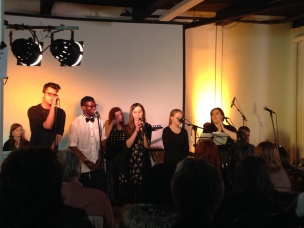 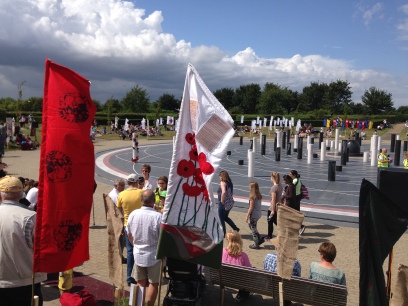 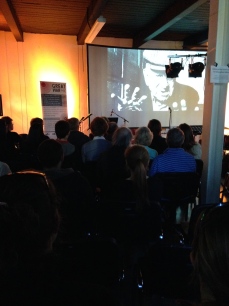 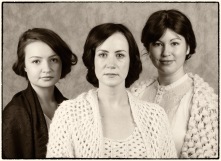 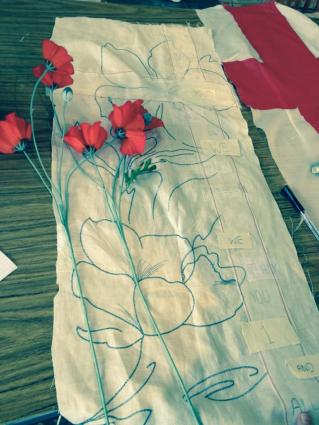 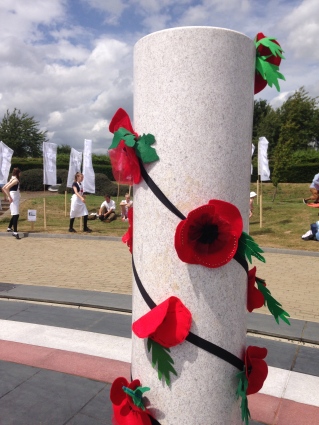 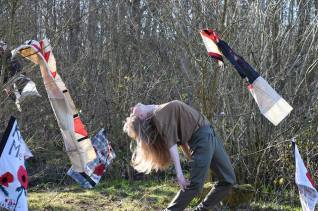 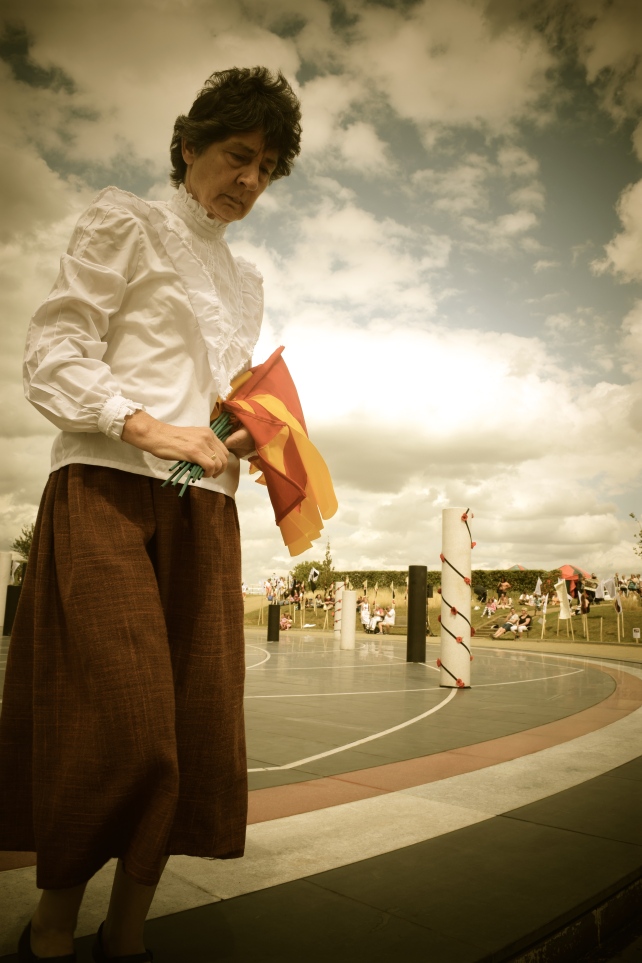 On Sunday 5th July Westbury Arts Centre staged an outdoor performance of dance set against an installation of banners to commemorate WW1.  This took place at the MK Rose in Campbell Park, a quiet circle of commemorative pillars surrounded by an enclosing hedge which was filled with brightly coloured banners and the movement of dancers performing amongst the stone pillars. The dance performance, set against a backdrop of the circle of multi-coloured banners, took place against stormy skies which heightened the drama created by the moving and dramatic choreography and the fluttering banners set all around the Rose – itself a place of commemoration.  The performers embodied the emotion of the piece although many will never have known a veteran of the Great War themselves and gave a truly sensitive and moving performance.

There were two performances which were well attended despite squalls of rain and gusts of wind which heightened the impact of the music and the banners during the performance.  Twelve different groups performed, ranging from primary school children from Longmeadow School who wove a moving picture using the poppy banners and some of the individual poppies made by the community to a gentle and very beautiful waltz by residents and friends from Shenley Retirement Home to the sound of Waltzing Matilda.  The dancers moved across the black stone of the Rose, using the pillars and the banners in a complex set of themes, including soldiers on the battlefield, the nurses who cared for them, prisoners and the communications on the battlefield and between those left at home and those serving at the front.  A complete list of the very accomplished groups of dancers is shown at the end.

The banners were arranged in thematic blocks, some showing images of war on the sackcloth that would have been used for sandbags, fluttering white crosses and feathers on gauze that was reminiscent of bandages, bright coloured banners showing the emblems of the Sikh and Hindu regiments, smaller banners with the poppy motif which were both made and used by the youngest performers and many individual banners telling personal stories passed down through families.  The banners were created by 9 different groups and many individuals through a series of workshops run by Vinny Stapley over a 9 month period – a list of the contributing groups is shown on the attached leaflet.

Although the final performance was the summit and allowed us to share the project with the community as a whole, the workshops in which the participating groups and individuals worked on the dance and the banners were just as important and the feedback we received from these was full of enthusiasm about the sharing and the learning that was made possible by the artists leading the workshops:

‘Another fabulous workshop – Vinny is an 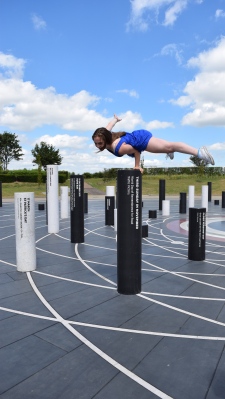 absolute inspiration’; ‘Lovely to work with Effie – her lessons were really enjoyable’; ‘Fantastic morning, lovely hearing everyone’s family stories’; ‘ It was a great way to remind us of the war, whilst being creative’.’The creation process was fun – working closely with Helen has been a great experience and I have learned a lot.’ ‘The personal accounts on the banners were very moving and showed how the past lives on in our memories.’ ‘A beautiful and moving performance.’

The banners will be on display at Westbury Arts Centre from 11th July to 31st July – please contact WAC for details on admin@westburyartscentre.co.uk or 01908 501214 as otherwise we cannot guarantee access to the full display.

Westbury Arts Centre would like to thank Helen Parlor, Chris Bradley and Effie McGuire Ward for their inspired choreography and to thank the performers for their dedication and commitment to the project; Vinny Stapley, the brilliant textile artist who worked with the many makers both through workshops with specific groups and also through open workshops at Westbury Arts Centre and who conceptualised the themes of the different groups of banners in collaboration with the choreographers as well as making many of them herself.

We also thank the many helpers, especially Sophie Cullinan, a textile artist herself, who supported the project, Caroline Malone, Chair of Westbury Arts Centre, who took on the role of project manager and the many volunteers who made it possible for us to bring such an ambitious project to a triumphant conclusion, especially Helen DenDulk and Kate Edwards from Westbury and Lallie Davis, the overall GreatWarMK project manager for AHA-MK. 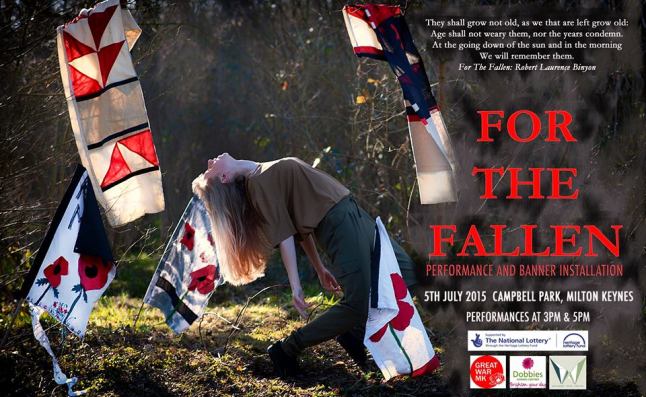 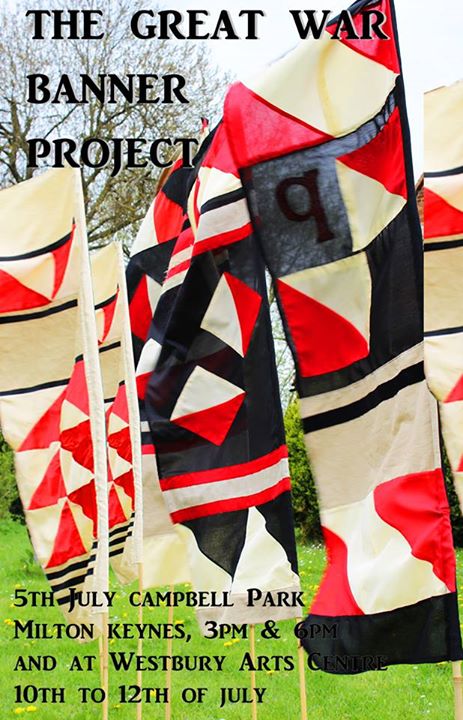 The workshop, at Westbury Arts Centre, is suitable for all levels of ability, from beginners interested in learning textile skills, to those with advanced textiles skills.

The workshop will be run by Vinny Stapley, a textile artist and teacher, who plans to work with a wide range of groups within the Milton Keynes community to create hundreds of Banners to commemorate those people who served in The Great War. The Banners made will form part of a procession of Remembrance and a Dance Performance in Campbell Park in July 2015.

Vinny will come in with some materials, but it would also contribute to the project as a whole, if participants were able to bring in old WW1 photos or other mementos of family members to discuss and maybe integrate copies of these into their own banners.

Westbury Arts Centre’s Banner Project aims to produce over 500 commemorative banners to be included in a large-scale dance piece entitled ‘For the Fallen’ taking place in Campbell Park.  Textile artist Vinny Stapley has been working with groups to create these banners – the dance project is being choreographed by Helen Parlor, Effie McGuire-Ward and Chris Bradley.

Here are some examples of the beautiful banners being produced… 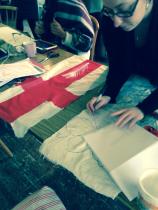 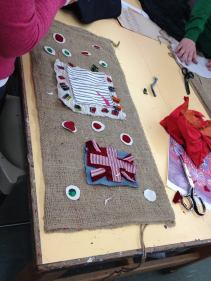 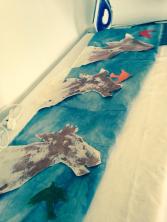 If you are interested in getting involved in this project you can either attend a public banner workshop, or if you are part of a group, speak to Westbury Arts Centre directly about running a workshop: caroline@westburyartscentre.co.uk / 01908 501214

If you are part of a dance group, Westbury Arts Centre are also looking for more dancers to be part of the final dance piece – more info can be found on the Dance Great War Flyer.

We are also looking for people to create and donate poppies to be included on banners – more info here.