For a brief overview of our Great War MK project, with a stunning soundtrack by young singer-songwriter Anna Hester, please take a few minutes to watch this video:

There are short films relating to each strand of the project available here: https://vimeo.com/greatwarmk

This film tells the story of how the WW1 archives of Milton Keynes, held by Living Archive, have been interpreted through music.

The film of For the Fallen, the development of the banners, the dancing and the finale…

The film of the making of the The Best Company tank.

And The Best Company Performance…

On 6th November, the Great War MK project partners came together to deliver ‘Great War MK Remembered’ our finale event at The Venue MK.  Produced by Full House, this event was designed to be a showcase of the different elements of the project and a fitting commemoration for the WW1 centenary.

“I just wanted to say how much we enjoyed last night. It was very professionally put together, very entertaining, and made us really think about the affect the war had on our local area.”

“The dancing was thought provoking and a unlike anything I have seen previously, ballet, national and folk. It was a cross between street and gymnastics but at the same time graceful and eloquent and really encouraged your imagination…” 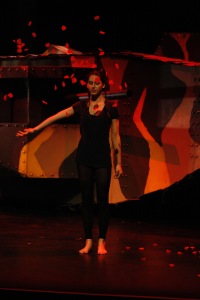 “A remarkable feat and at times poignant tribute to those that served in the Great War…The Last Post said it all with hardly a dry eye in the house.”

“The closing scene was moving and beautiful, with an excellent rendition of the Last Post.”

“A thoughtful & fitting finale to a wonderful project.”

“The readings and poems were well chosen and emotionally moving. The excerpt from Nellie was both poignant and amusing – just the right balance.”

“All the animations were good but the one that will really stick in my memory was Lego in the trenches by the Great Linford Scouts. I think this could, and should be entered in both national and even international competitions.”

The Arts and Heritage Alliance would like to thank everyone who was involved in the project, and everyone who joined us for the finale on 6th November.